Hanbok (traditional Korean clothes) has been a part of Korean tradition for centuries. When watching Korean historical dramas, we often find ourselves fascinated by their beauty.

But one more thing that catches our eyes is the dazzling ornament tassel, also known as norigae, that beautifully hangs on Korean women’s chests or waists.

If you’re unfamiliar with it, you probably think it’s just a mere accessory that goes well with Korean clothes. But like other traditional objects, it also comes with meaning, purpose, and rich history that Korean people still value and treasure to this day.

Want to know more about this traditional Korean accessory? In this article, we’ll share all you need to know about norigae, so scroll down and read ahead! 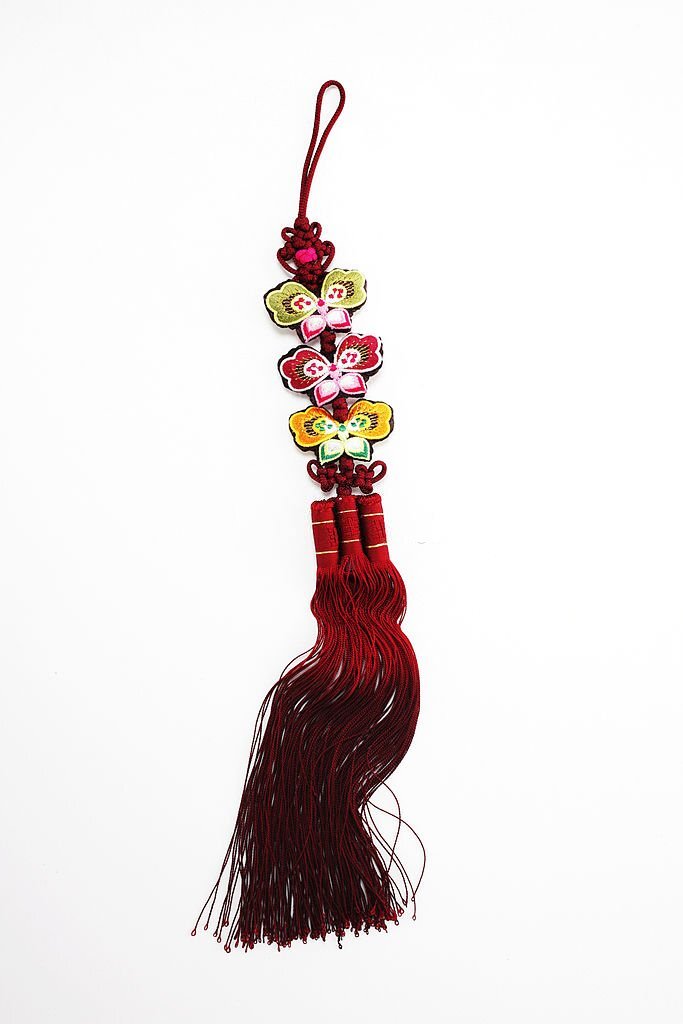 Aside from hairpins, earrings, and necklaces, Korean women wear an essential traditional jewelry called norigae. The word means ‘pretty and playful objects’ or ‘favorite trinkets,’ while the accessory itself symbolizes Korean femininity, protection, and prosperity.

It is made of silk threads or strands braided into knots. With detailed pattern and designs in different colors, it highlights the simplicity of hanbok. And it makes a woman look more feminine as it swiftly sways with the movement with soft jingling noise.

Its main purpose is to bring good fortune as it serves as a good luck charm. But other meanings of each norigae design depend on its elements. 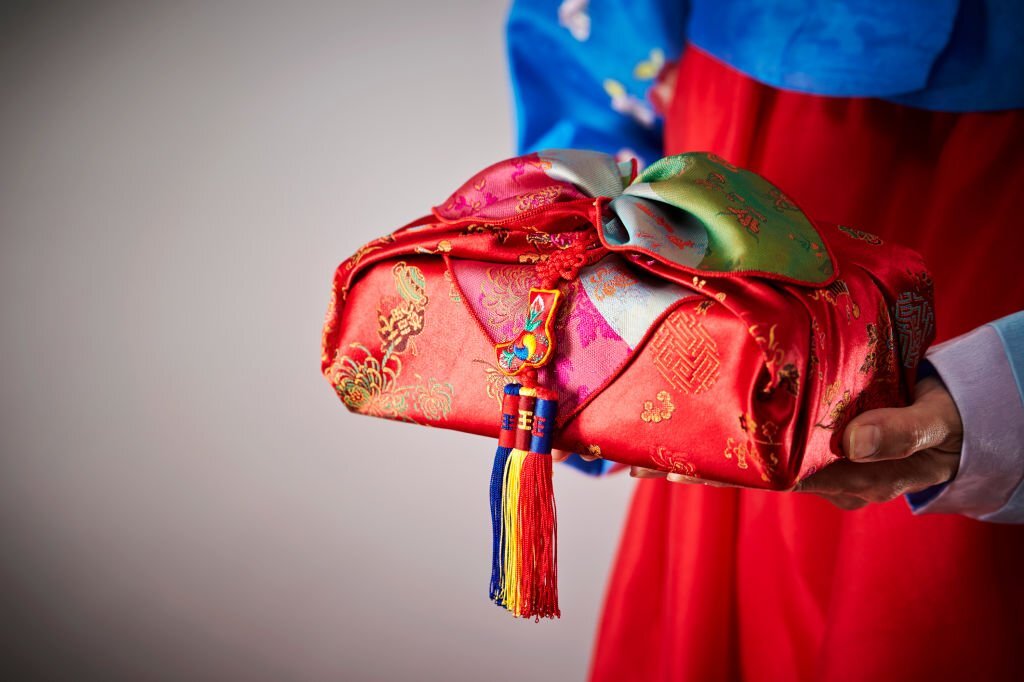 Additionally, it makes a great traditional gift for weddings, given by mothers or mothers-in-law to their daughters to pass down in their family for generations. It is usually included in a Korean wedding gift box called ‘ham,’ which the groom’s family sends before the wedding. Norigae was first used by Korean women during the Silla period. Back then, it was known as ‘yopae’—ornaments made of cloth and thread. Over the years, its design, structure, and materials slowly evolved, and the ornament emerged as ‘norigae’ at the end of the Goryeo dynasty.

But it was the Joseon era when the use of norigae was encouraged as necklaces, earrings, and other accessories that reflect ostentation and vanity were prohibited due to Confucianism beliefs.

From queens and princesses to commoners, women of all social classes were allowed to wear norigae. Still, their social rank is identified through its style, size, color, and materials, as those with bigger and prettier norigaes are considered wealthy and powerful. 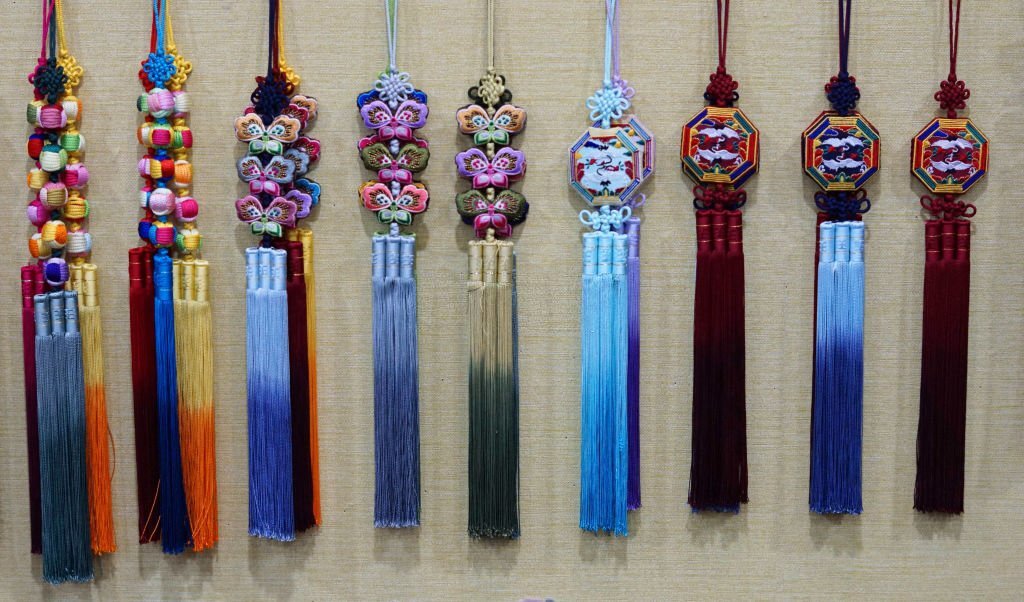 Traditionally, women wear norigae during weddings, funerals, and religious festivals. But the type of norigae, especially its design, should be appropriate to the time, place, season, and event.

Moreover, apart from being a beautiful accessory, women used norigae to attach their essential items such as a mirror, comb, and ‘jangdo,’ which is an ornamental dagger for self-defense.

They also used to attach other items like perfume, incense bottles, silver spoons (used to detect poison in their food), and needles as embroidery skills were one of the must-have virtues of women in the Joseon period.

You May Also Like: Guide To Ondol, Korean Traditional Heating System 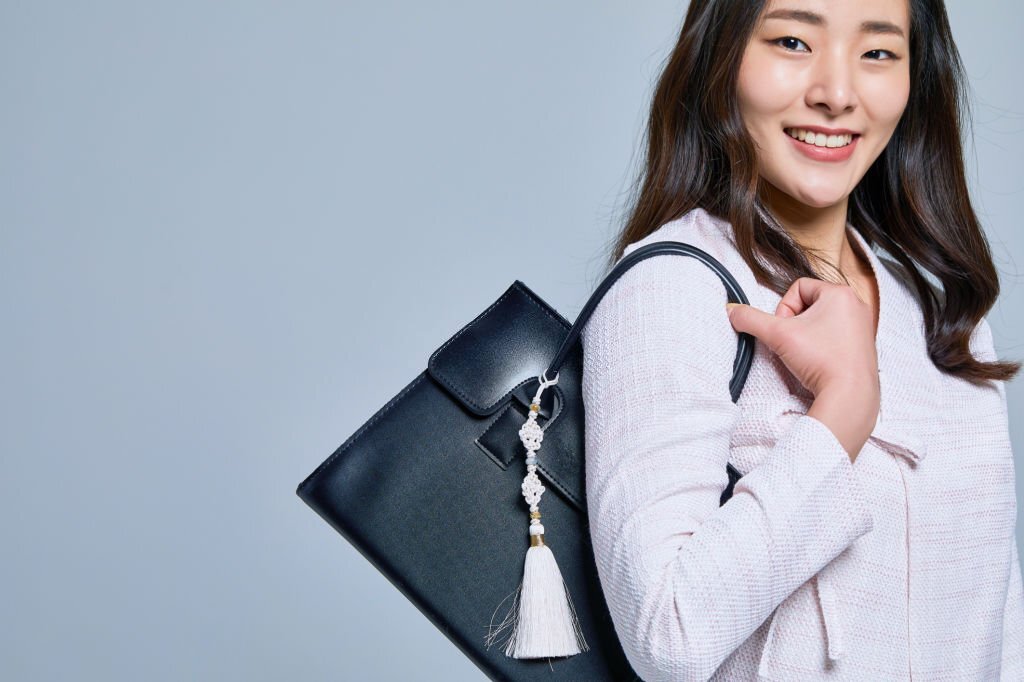 Since Korean clothing shifted to Western-based style due to modern fashion, the use of norigae has also changed. Instead of wearing it daily, people now only use it during special occasions like weddings, Lunar New Year, and Chuseok.

To encourage more people to use them again, contemporary jewelry designer Ki-youl Nam had an idea to create a modern norigae design. He believes that people would start incorporating them into their clothing style if it blends well with modern fashion.

Aside from modernizing norigae, he also added non-traditional materials like topaz, pearls, fire coral, and even a branch of deep red Japanese coral to put a twist on traditional norigae. What makes his norigaes even more interesting is that the ornaments are detachable, meaning it can be transformed and used as a brooch. 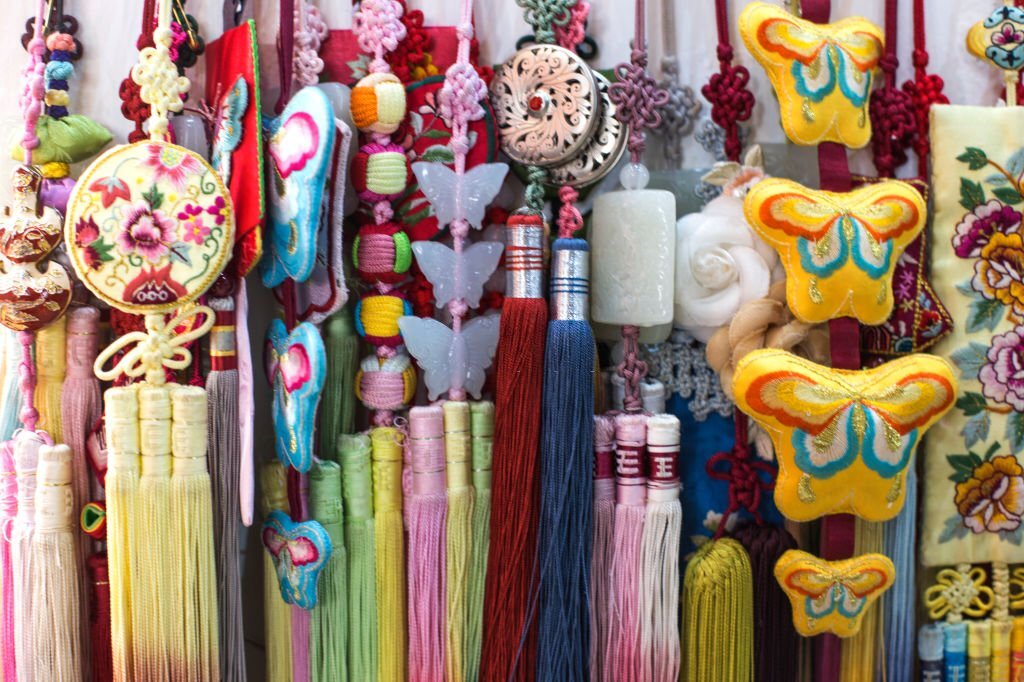 The tassels are made with dahoe (cord), and every norigae comes with a different number of tassels. But danjak (one tassel) and samjak (three tassels) are the popular ones as they’re known as good luck charms.

The knots represent animals and plants to attract fortune, while the charm is carved into religious symbolism and natural elements.

Below are the meanings of different forms of charm:

How to Wear it? A norigae completes the look of a hanbok. So, how to wear it properly?

It should always hang on the waistband of the hanbok’s ‘chima’ or skirt. But it can also be on the outer cord of ‘jeogori goreum’ (upper garment of the hanbok) or jacket of the hanbok.

The norigae is usually attached to the garment using ddidon or clasp/metal hook that comes in different shapes.

Where to Buy it? If you’re planning to visit and buy norigaes in South Korea, the best place to go is In-sadong—a market where you’ll find authentic Korean traditional items like norigae and hanbok.

You might also find some norigaes in famous shopping places like Busanjin Market and Myeongdong, which are also known for products like clothes, accessories, jewelry, and skincare products! 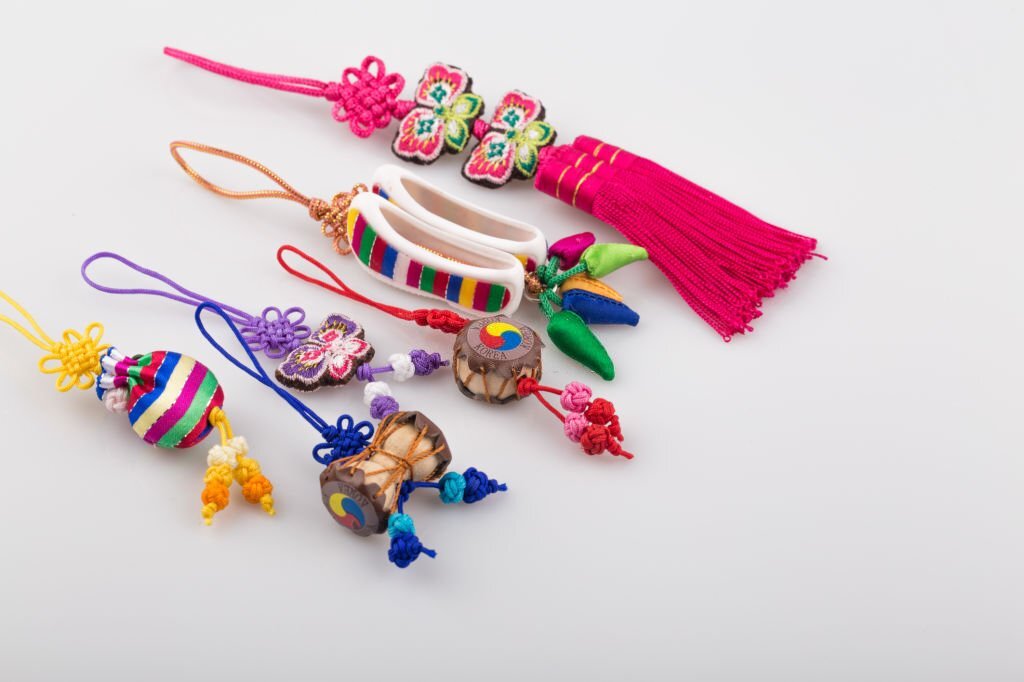 But if you want to get norigae without flying to South Korea, you can search for online shops like Joteta—an authentic Korean online shop that offers quality norigaes, bojagi, and hanboks. You can also search on Amazon for more designs!

Tattoos in South Korea are becoming less taboo than before. In fact, K-pop idols like TWICE’s Chaeyoung, BTS’ Jungkook, and EXO’s Chanyeol have a plethora of permanent tattoos! So, many young Koreans are starting to get mini and even large tattoos to express themselves and embrace individualism.

Other Korean tattoo artists on Instagram, like PittaKKM, EQtattoo and Tattooist Greem, also do norigae tattoos. Some of their works are only norigae-inspired and customized as they come with meanings and even personal stories based on the chosen symbols, colors, and overall design.

A norigae is an essential part of Korean tradition, especially for women. Although most Korean women don’t wear it often today, they still treasure it by incorporating it into their daily style and inking an illustration of norigae to their bodies. Some even use it as a home decoration to value their culture and tradition every day, even in modern times!

We hope that you’ve learned a lot from this article. Also, we’d love to hear your thoughts. So, if you have comments, feel free to share them with us below!