We all have our down days. And when life becomes too tough, sometimes all we need are some encouraging words. Luckily, Kdramaland has no shortage of inspirational quotes to help keep us going.

Running short of motivation? Here are 25 beautiful Korean drama quotes that will inspire you today.

“No matter what’s making you suffer right now, things will settle and pass eventually. Hang in there until then, and you’ll find yourself stronger.“

In this episode, Wol Ju (Hwang Jung Eum) comforts a woman who can’t conceive a child. Wol Ju assures her that she will make it through, even if she’s been suffering for years. 2. Dali and the Cocky Prince, Episode 15

“We all started as a dot. That dot caused the Big Bang and created stars, the sun, and the Earth. So in a way, we are nothing but dust and stars at the same time. We were never some cheap dolls.“

If you’re feeling small lately, this one’s for you.

By being both dust and stars, Da Li (Park Gyu Young) thinks that we’re both grand and small at the same time. Whatever the case, we’re never some cheap, worthless dolls. “When you run, you don’t think about what’s behind you. The only thing that matters is what’s right in front of you. Normally, it’s the finish line. But today, it was you.“

Now for a dash of romance. Track and field runner Seon Gyeom (Siwan) tells us how to run towards our goals. It’s all about keeping our eyes straight to the goal – whether it’s a dream or a loved one. “As you live, there will come a moment when you realize it was all for today. So live.”

When a guy who kept failing the police exam tried to end his life, Goo Ryeon (Kim Hee Sun) had something to say.

Ryeon killed herself in her past life, too. She knows what it feels like when life seems meaningless now. But she assures the guy that he will find meaning in living, just as she did. “You are by far the most experienced fencer when it comes to losing. Those losses were blocks to build yourself stairs leading up. Now you’ve got the highest staircase.

You might have lost your confidence because you always lost. But for Baek Yi Jin (Nam Joo Hyuk), your losses are actually staircases towards victory. “Every life is a work of art. And it becomes complete when all the pieces come together.”

Another nice quote if you feel like your life has no meaning. You might not understand what’s going on in your life right now. But trust us that it will all come into place someday. “You’re bound to meet unexpected situations in life. Even if you use an umbrella, you’ll end up getting drenched. Just put your hands up and welcome the rain.”

We can’t always keep in control. And that’s not always bad thing. And in times like this, Hong Du Sik (Kim Seon Ho) tells us to just enjoy the rain. “The first step is always the hardest. But once you take your first step, things will get easier from then on.”

Too scared to do something? Donm’t worry, the scariest part is starting out. Once you begin, it will all seem like a breeze. “I’m scared of losing my hearing again. I’m scared of being hit and getting injured. But what frightens me the most is going back.”

Our dreams can seem so big and scary. But for Ko Dong Man (Park Seo Joon) what’s scarier is living without trying to achieve our dreams. 10. Because This is My First Life, Episode 1

“We are all living this life for the first time.”

It’s okay to make mistakes. No one’s an expert at life, since we’re living this life for the first time. Feeling like you’re lagging far behind? Halmeoni from Start Up reminds us that we all live different paces. Our time to bloom will come soon. “Giving up on a hopeless war will give you a new opportunity.”

Sometimes, the smartest move is to give up. Vincenzo (Song Joong Ki) understands that this isn’t easy. But hang on, because giving up might actually lead you to success. “Putting up with the pain isn’t always good. If you’re in pain, scream. Otherwise, no one will know.”

We bet you’re keeping all your struggles to yourself. But putting up with the pain can actually harm you in the end. If you have someone else, it’s not too bad to share your worries to them. “Though my life is unusual and peculiar, it’s valuable and beautiful.”

Because she’s a lawyer with autism, many find Woo Young Woo (Park Eun Bin) strange. So to anyone else living unusual lives, Young Woo assures you that you are valuable. “Even emperors who ruled over everything were afraid.”

If even powerful emperors felt afraid, then fear is totally normal for anyone. You’re not a loser for being scared. 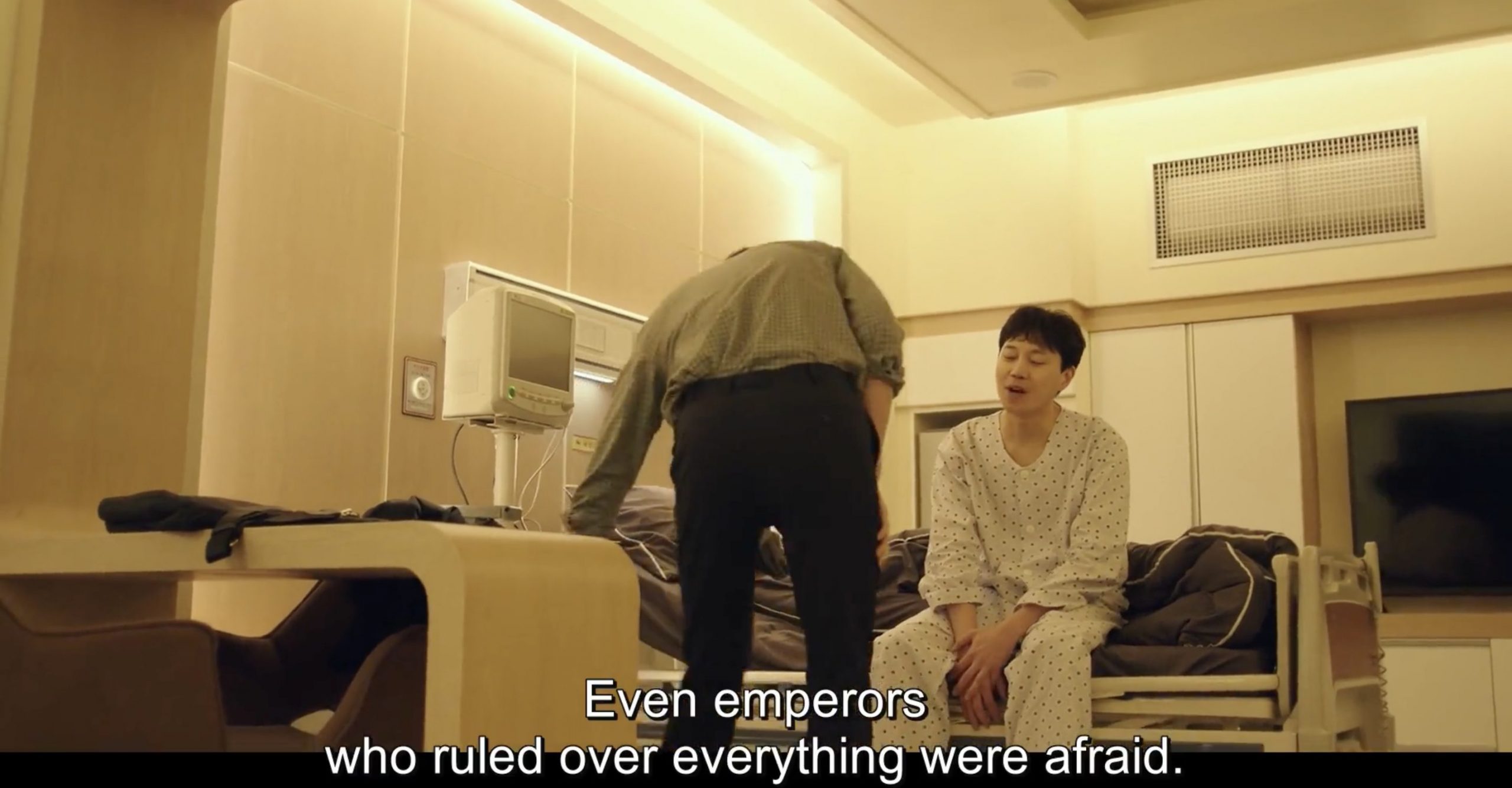 “If you let fear rule your life, you’ll be daunted by more and more things to the point that you can’t do anything. And if that happens, you’ll become even more fearful.” “No matter how hard life gets, never regret anything that made you smile.”

When life becomes too difficult, sometimes we blame it on our good times. But no, it’s not a crime to smile. Tough times aren’t born from happy times. “At times, we may encounter bad weather. Such as thick fog, yellow dust, rain, or snow. But through those moments, we’ll learn something.”

Here’s to looking at things on the bright side. Whatever problem we’re facing, it’s always a learning experience. And it will teach us to do better from now on. This is actually one of our favorite Korean drama quotes. Never ever give up!

“Don’t give up until you exhaust all the possibilities.”

Giving up easily can lead to regret. You’ll end up with lots of “What ifs,” wondering what could have happened if you did everything you can. So before you give up, try to throw all the weapons you have first. “In the end, fate and timing do not just happen out of coincidence. They are products of earnest, simple choices, that make up miraculous moments. Being resolute, making decisions without hesitation—that is what makes timing. He wanted her more than I did. And I should have been more courageous. It was not the traffic light’s fault. It was not timing. It was my many hesitations.”

Hesitations can lead to failure. If you want victory, better make up your mind if you really want something. So you’re not thinking twice about the actions you should take. Life has probably thrown all sorts of crazy things to you. But as Hyeon Yi (Lee Joo Young) reminds us, we are indestructible rocks. Our problems won’t destroy us. 22. When the Camellia Blooms, Episode 39

“Miracles don’t exist. It’s just little heroes inside us working together. The small acts of kindness done by kind people. It’s just the result of all the good deeds you’ve done. You just think it’s a miracle.”

Something seems too far from your reach? Remember that everything happens because of our own efforts. Nothing’s too unachievable if you work for it. “Sometimes the wrong train takes you to the right direction. It was like that for me, too. Throughout my life, I always felt like I was on the wrong train. One time, I wanted to give up. I didn’t want to go anywhere. So I thought of jumping off the train. Look where I am now. I took the wrong train again, and a very wrong one at that. Still, you should think about the future, even if things don’t go as you wish. I hope you arrive at the right station, no matter which train you take.”

If you think you’re on the wrong path in life, this is for you. There’s really no such thing as a wrong path. Because everything leads us to where we’re supposed to be.

“The thought of being saved by a knight in shining armor is too far-fetched for me to believe. I’d rather write my own life’s story.”

Here’s an empowering quote to our strong independent people out there. It’s not too bad to ask for help. But often, we’re already strong enough to save ourselves.

You can do it! “I’m just 18, too young to lose anything. The stuff I have can’t be lost. For example, my dream and admiration.”

Now for our final quote. In this difficult life, we have probably lost a lot. But there are some things that can never be taken from us. Hang on to them! I hope you enjoyed this list of the best Korean drama quotes! Which one is your favourite?  Did we miss some? Let’s us know in the comments below!

All the Korean dramas featured in this list are inspiring shows. If you’re running short of inspiration, try to watch these dramas for a boost of encouragement.

Meanwhile, we hope this list gave you enough motivation to fuel your day.